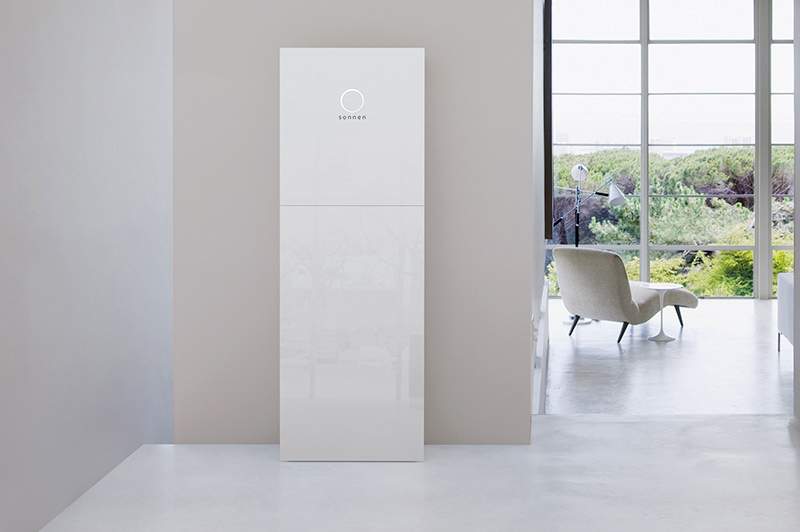 German energy storage systems manufacturer sonnen has introduced a radical new way of helping households cope with ever-rising power costs. The German battery storage maker will absorb all electricity charges, and instead charge a flat fee (of $30, $40 or $50 a month depending on the size of the dwelling and capacity of its rooftop solar array) for those households installing the company’s energy storage systems, saving the average home around $3,000 a year in power costs.

In exchange for paying the household’s electricity cost, and the household paying a regular and predictable flat fee,

sonnen will integrate its customers’ residential storage batteries into the nation’s power grid to create a “virtual power station”. sonnen can respond to demands from the utilities at times of high demand on the grid within seconds.

“Households are struggling under ever changing and ever rising power bills, and instead we are offering to pay those charges in exchange for a flat charge. It is like a mobile phone plan,” says the head of sonnen’s Managing Director and Chief Sales and Marketing Officer, Philipp Schroeder.

“Our sonnenFlat plan will allow households to plan their finances and save thousands of dollars a year in power charges,” he said. The sonnenBatterie is the only battery capable of having power stored in the battery drawn down for the purposes of supplying energy to the grid – and leave sufficient power for the household – because of the ability of its lithium-iron-phosphate battery to charge and discharge up to three times a day, and the inclusion of its high-tech “smart” control.

The technology is proven, with sonnen already supplying electricity to 100,000 people in Germany, Italy, Austria and Switzerland via its “virtual power plant”.

Since power charge increases of up to 20 per cent after 1 July, a three-bedroom home will pay an estimated $3,400 a year for annual consumption of 10,000 kWh. A sonnenFlat plan of, say, $40 a month caps regular power charges at $480 a year. This is on top of the cost of the battery system, but the savings are such that the system will pay for itself potentially in 5-6 years.

sonnen co-founder, Christoph Ostermann, at the launch of sonnenFlat in Sydney on Wednesday evening, said: “sonnenBatterie technology is dramatically changing not only household energy use and making households less dependent on electricity grid power, but ultimately the way the utilities deliver power to Australian households and businesses.”

sonnen’s Australian partners are also looking forward to providing their customers not only the market leading residential storage system but also an option to insulate the household from rising electricity prices.

Wilf Johnston, managing director of sonnen’s sole distributor Flex Australia, subsidiary of the multibillion dollar company Flextronics, said, “sonnenBatterie is the next step in the evolution of the energy storage space and sonnenFlat represents the right direction towards changing the Australian energy landscape. We are excited to work with sonnen and deploy sonnenFlat across Australia through our partner network.”

Philipp Schroeder added: “A large part of the solution for a future in which renewable energy will form the bulk of Australia’s energy needs is in front of the faces of decision makers. Consumers are choosing battery storage for their homes to be more independent of the utilities, but at the same time household batteries will solve many of the grid stability and energy security problems experienced in parts of Australia. Households will embrace battery storage for their homes regardless of what politicians do or say.”

sonnen markets single and three phase alternating current or direct current battery systems with the newest product offering of a hybrid three-phase battery system. The sonnenBatterie hybrid houses an in-built inverter. The system is flexible, allowing the household to choose between battery capacities ranging from 2 kilowatt hours (kWh) up to 16 kWh, in 2kWh increments.

A self-learning algorithm and data from the weather bureau processed by the smart system can identify the best time to start charging and, even with no-one at home, can activate appliances.

Chris Parratt, managing director for sonnen Australia said demand for batteries was so strong that sonnen was considering setting up a manufacturing operation in Australia. “Rising demand because of ever-increasing power costs and a desire amongst households to be as independent of the utilities as possible means we are getting close to making a decision on manufacture here. We are also getting strong demand out of Asia, and Australia would be the platform to supply these markets too. The case is getting stronger all the time.”

sonnen is the world’s largest supplier of residential energy storage systems, and in 2016 established a base in Australia, which it sees as potentially its biggest market. Australia has 1.6 million homes already fitted with solar panels, and many of these households are choosing to retro-fit energy storage. The Climate Council recently estimated that household and commercial battery storage capacity would grow 10 times from 90MW to 900MW in the four years to 2018.

The Council estimated that half of all households would have battery storage installed by 2030.

The sonnen Group is one of the fastest growing companies in Germany. In a ranking of the “Top 50 Smartest Companies 2016” by the Massachusetts Institute of Technology (MIT), sonnen was listed alongside Amazon, Facebook and Tesla. Investors in the Bavarian company include the US technology corporation General Electric. sonnen already supplies over 60,000 people globally with clean energy. The sonnenCommunity is an online network based on the blockchain idea for sharing self-generated power.

Now available on the Sunshine Coast

All existing Halcol on-grid solar customers are able to take advantage of this exciting new innovation. This really is a no-brainer!

NEW: We also have a special offer unique to our relationship with Sonnen, where we can offer no monthly fee for the first 2 years and a market leading finance deal of less than 10% comparison rate for 7 years.

These offers are exclusive to Halcol Energy on the Sunshine Coast – no one else can offer you total independence from the grid with sonnenFlat.

Call our team on 5438 8133 or email consultation@halcolenergy.com.au